The winners of both initiatives received their awards at the ceremony, after which the publication New Traditional Architecture MMXX was presented

The Richard H. Driehaus Architecture Competition and Building Arts Awards Ceremony was held on October 7, 2020 in the assembly hall of the Ministry of Transport, Mobility and Urban Agenda. 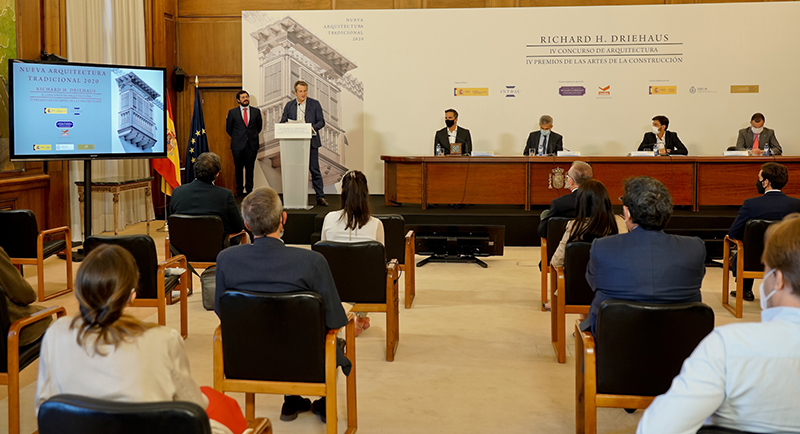 On Wednesday October 7th, the winners of the Driehaus Architecture Competition and the Building Arts Awards received their prizes at the Conference Hall of the Ministry of Transport, Mobility and Urban Agenda, during a ceremony chaired by the Secretary General of Urban Agenda and Housing, David Lucas, with a restricted audience and in compliance with the health protocols.

The Ceremony started with a virtual intervention from Chicago from Richard H. Driehaus, the promoter and patron of both initiatives, who emphasized: “I am inspired every time I see the outstanding work of the honorees in both the Building Arts Awards and the Architecture Competition. In addition to admiring the beauty, quality and expertise of the laureates’ work, it is a pleasure to meet such talented, warm and passionate individuals. Their deep love for their profession is obvious. Such passion is helpful when facing additional challenges, including widespread lack of recognition and understanding. I hope these awards shine a light on their many achievements.”

Firstly, the Driehaus Architecture Competition awards were presented. These awards are endowed with 12,000€ each, and during the last four years they have contributed to recover traditional architecture in several Spanish locations. This year, the towns selected were Santiago de Compostela, Alzira and Guadix. The mayors of these three cities expressed their gratitude for the opportunity provided by this competition to rehabilitate some of their spaces of their built environment.

First to receive the award was the team of architects composed by Eva Niño, Elia San Román and Carmen Carral, for their proposal for Santiago de Compostela, “Hydrangea”. This is an ambitious project that recovers several derelict buildings, to create housing for artists. Additionally, it connects the area of intervention with the Santo Domingo de Bonaval Park.

Next, the Seville-based architecture studio Jiménez & Linares received their award for their proposal for Alzira, “Ad Fontes”. This project includes an interesting proposal for the recovery of the urban fabric of the western part of “la Vila” and the rehabilitation of the remains of the almohade wall and the Temple of Santa María. 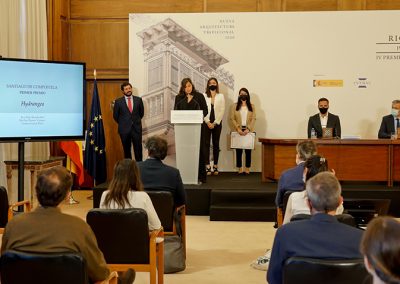 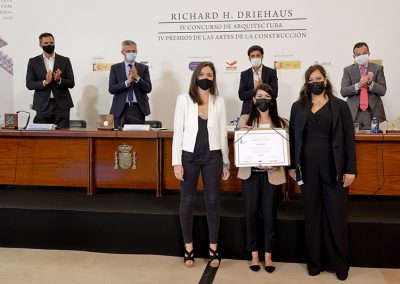 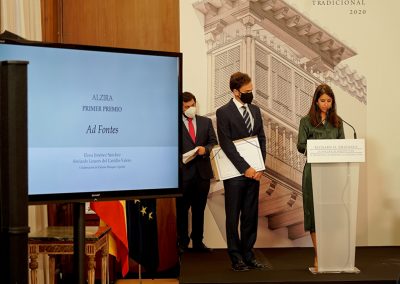 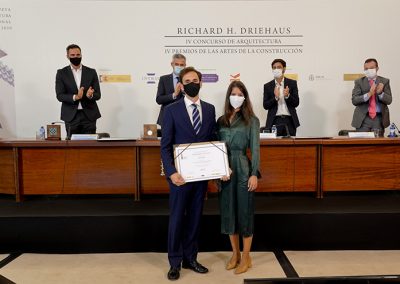 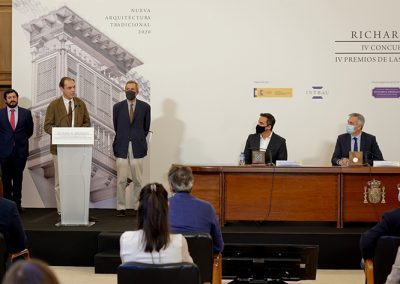 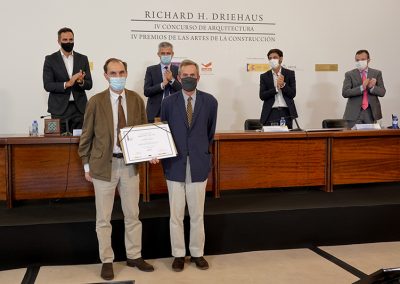 Then, the winners of the Building Arts Awards received their prize of 10,000€. The purpose of these awards is to promote traditional trades essential for the preservation of historic heritage. These trades use techniques that respect the environment and support local economies.

The artisans who received their awards personally in the four different categories are: the Muñoz de Pablos family of master glassworkers from Segovia; Franciso Luis Martos, Úbeda, one of the most distinguished professionals of the carpintería de armar; Rodrigo de la Torre from Valladolid, master stone mason who has worked in more than ten Spanish cathedrals; and finally, master hut maker Antonio Gandano (Cádiz), who builds houses with reed and grass roofs. Furthermore, Gandano has been the recipient of the Donald Gray Scholarship, endowed with 14,000€ for the training of an apprentice, who will also receive 12,000€ during his apprenticeship. 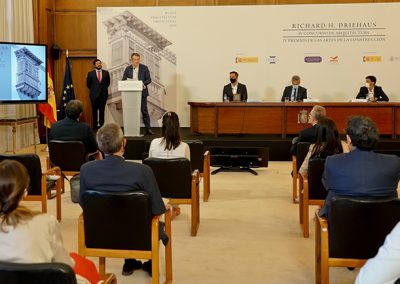 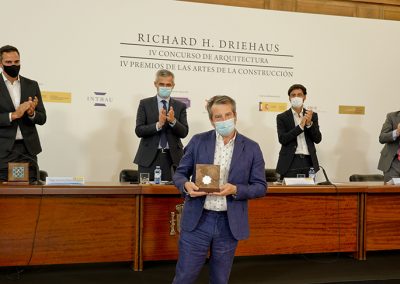 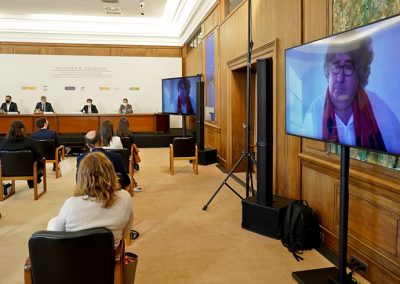 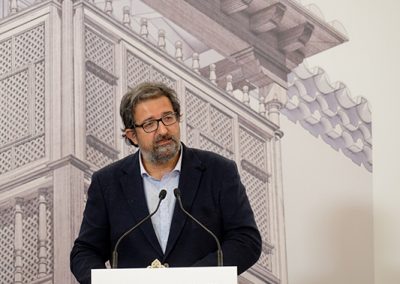 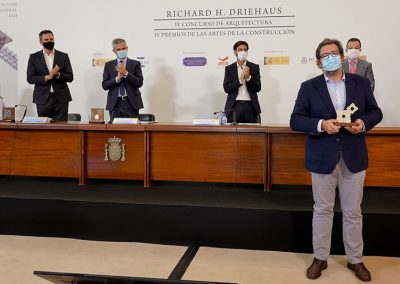 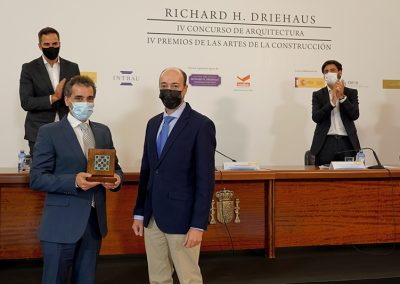 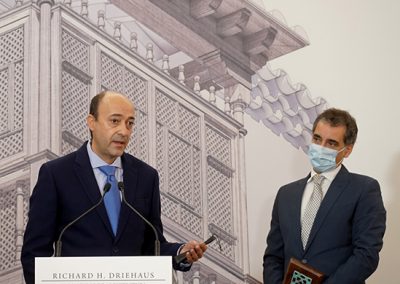 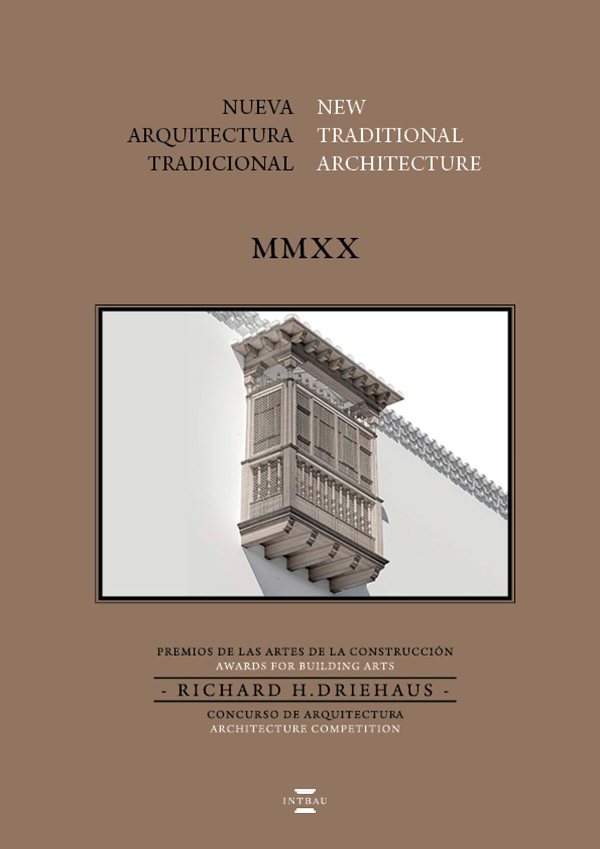