The Driehaus Competition is a generous and unprecedented initiative from US financier Richard H. Driehaus to help the recovery of the Spanish architectural heritage. The three Spanish locations selected in the first phase of the Competition were Vejer de la Frontera, in Cádiz, Grajal de Campos in León, and Jaca in Huesca.

In its second phase, 78 national and international  rchitecture studios submitted their architectural and urban design proposals to respond to the needs of these towns. Architecture Studio Juan Moya from Granada and Basque architects Imanol Iparraguirre and Aritz Díez were the winners of the First Prize, endowed with 12,000 Euros.

Granada studio Juan Moya’s project designs a new neighborhood for Vejer de la Frontera, preserving its architectural essence. The Project, named “Abriendo a Cal y Canto”, develops a new extension on the western edge of the town, creating a staggered nucleus of whitewashed buildings spread at the foot of the windmills, respecting the prominent position they have occupied for centuries. The jury stressed the project’s respect for the landscape and the history of this village located in the province of Cádiz. 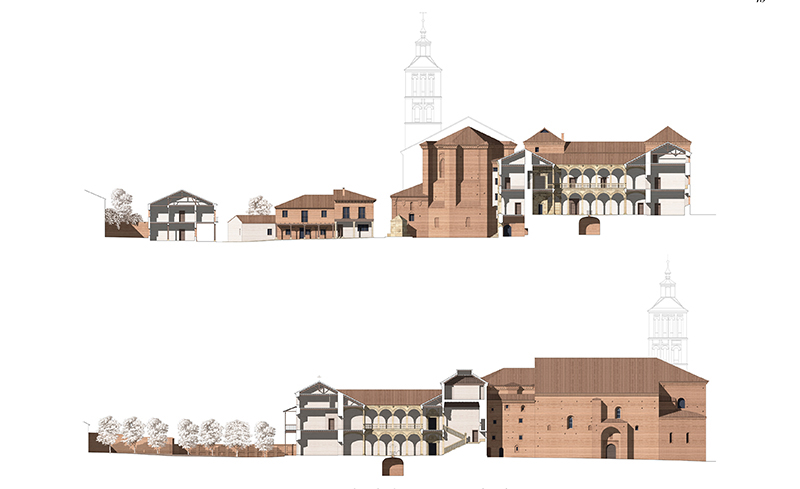 In the case of Grajal de Campos, the Basque architects propose in their “Lazarus Project” the rearrangement of the buildings that used to make up its Plaza Mayor to dedicate them to housing and public commercial premises. Additionally, they recover the old fountain, meeting place for the neighbors in the past. The old Palace and gardens also recover their old image to accommodate new uses. Its eastern wing will be dedicated to tourist accommodation and the wooden gallery that presided the garden before its dereliction will be restored. The jury praised the respect for the history of the town, and the choice of designs, construction techniques and materials typical of the area.
On the other hand, the ambitious project for Jaca contemplated the transformation of the interior of one of the blocks of the old town to create a new Plaza Mayor (Main Square). The construction of this space would revitalize the town while respecting the traditional architecture of the area. The jury, which included the mayor of Jaca, was unable to choose a winning project¸ since unfortunately, none of them fulfilled all the conditions established in the competition rules.

The jury, composed by representatives from the Ministry of Public Works, the Ministry of Culture, the Higher Council of Architects of Spain, INTBAU, the city councils of the three towns and the Rafael Manzano Prize, assessed the quality and feasibility of the projects.

The Awards ceremony will be held on June 14 at the Ministry of Public Works.